Vefele and Rockefeller's Journey to Gold

Vefele Petruik began to follow her passion with horses at the age of 10 when she convinced her mother to allow her to ride.  For the next 7 years she and her mother cleaned stalls while she rode various school horses learning the basics of horsemanship and dressage.  At the age of 17 she purchased her first horse with the help of her father however due to tragic circumstances she lost  this horse and with a broken heart had to decide whether to continue with her pursuits or stop. 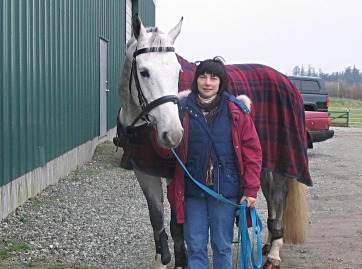 In 2005 Vefele and her trainer, Lisette DeRooy, decided to pursue her goals in dressage and purchase a new partner in her training.  In Holland, they found this new partner and imported Rockefeller to Canada.

Over the next ten years Rockefeller and Vefele have established a obvious bond that is the result of trials and tribulations, mistakes and forgiveness and love between a majestic animal and a loving partner, both of whom want to succeed together.

As in any relationship of this nature there were many successes and setbacks and for the first 5 years the growth was slow as the two learned to work with and trust each other. 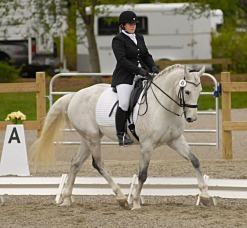 In 2010, Vefele traveled to California to work with Hilda Gurney.  Vefele began to ride Rockefeller twice a day, she spent time with him in the round pen and did as much as she could with him.  Hilda is a world class rider and trainer and was critical in the development of the  partnership.   Hilda taught Rockefeller and Vefele the upper level movements and real collection.  Pirouette after pirouette they started riding PSG, then showing PSG and riding Intermediate 1.  All at the same time, Hilda worked the pair with training the half steps and elements on the Grand Prix.

After working with Hilda for about a year, Vefele was offered a job as a trainer in Central California.  As head trainer Vefele had the opportunity to ride multiple upper level horses a day, all ranging from PSG to Grand Prix.  She was able to use the skills that she had developed with Hilda and began to practice even more so on Rockefeller. 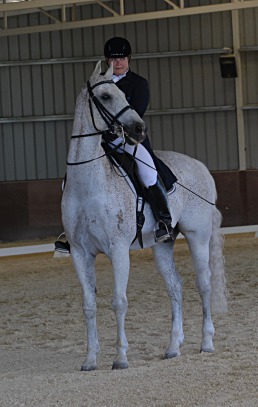 Vefele continued to show Intermediate 1 with good results however realized that eventually she needed to show her skills at a Grand Prix level to be seriously considered as an elite trainer of horses and riders.  Therefore, it was in 2014 that she decided that she should try Grand Prix to see where she and Rockefeller stood.  In the first few shows, Vefele was given a lot of insight in what she and Rockefeller needed to work on to enhance their skills and be able to ride at the highest level of dressage.

In October 2016, Vefele and Rockefeller received their first Gold medal score.  It was also at this point that Vefele realized that she and Rockefeller needed to improve in order to achieve success.  She decided to regroup and go back to the basics to improve her riding quality and eclipse her previous Grand Prix score.  A year later, Vefele and Rockefeller attended the show at Greenville Equestrian Center.  Vefele describes going into the show ring with a no risk, no reward mentality.    At the end of the test, she states that she felt happy with the test that they rode, no matter what score she would be receiving since Rockefeller had worked hard for her and she had worked hard for him.  They received with a well-deserved 62.7%, the final score needed for the USDF Gold Medal.  Vefele was ecstatic that she was able to accomplish this with Rockefeller, they had come so far together.   Basically, over the 12 years together they had grown from a young woman and young horse to a partnership that was able to perform the top levels of horsemanship with the level of excellence required to be recognized as Grand Prix.

Rockefeller will spend the rest of his days enhancing other riders’ skills with the help of Vefele’s guidance and knowledge in the discipline of dressage.